Ageing in Europe: A new book presents evidence on how to reinforce social and economic inclusion in spite of population ageing

Population ageing is a secular challenge which will strain the fabric of Europe’s societies.

These are some of the key questions pondered by researchers from all over Europe and Israel and contained in a new book on “Ageing in Europe – Supporting Policies for an Inclusive Society” which was presented on the 29th of October in Brussels.

Ruth Paserman, Deputy Head of the Cabinet of Marianne Thyssen, Commissioner for Employment, Social Affairs, Skills and Labour Mobility, informed about the relevance of these questions and the associated research: “Population ageing presents us with huge challenges, but also opportunities. The knowledge generated by SHARE will help us deliver reforms aimed at extending working lives and making social protection systems sustainable in our ageing societies. Now we must get more countries to participate in SHARE to enhance its usefulness as a tool for mutual learning” stresses Ruth Paserman.

The presented research is based on the latest data of the Survey of Health, Ageing and Retirement in Europe (SHARE). SHARE is supported by the European Commission’s DG Research & Innovation and DG Employment, Social Affairs & Inclusion and collects detailed information on European individuals aged 50 or older. SHARE is a key evidence base for the European Union's policy efforts aimed at reinforcing social and economic inclusion in spite of population ageing.

“The notion that population ageing drives our societies into a war between generations may be popular in television shows but the facts are quite different. Intergenerational cohesion is still strong all over Europe”, says Axel Börsch-Supan, Director of the Max Planck Institute for Social Law and Social Policy and Coordinator of SHARE. “Hence, well-designed public policy based on solid evidence derived from suitable data has a very good chance to further advance people’s quality of life in spite of population ageing”.

The book is publicly available >> here. 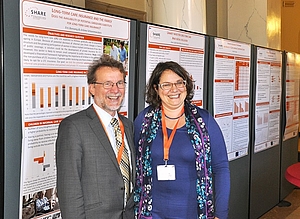